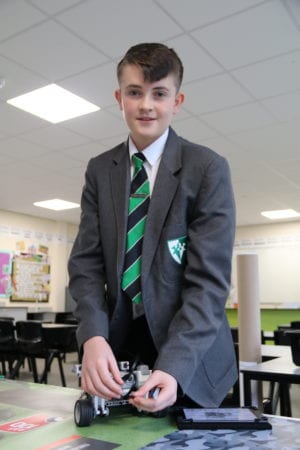 Congratulations to Lewis in year 10 who has been shortlisted as a finalist at the Nottingham Post Education awards. Lewis was an integral part of two of our STEM clubs last year, and is down to the last three in the Science and Engineering Student of the Year category.

Lewis played a key role in our first ever Lego Mindstorms Robotics club, working with his peers to ensure a top 50 finish nationally. Lewis’ determination to succeed meant he spent many hours outside of school researching and developing our robot design and writing the programmes to control the robot. His mature approach made him approachable to younger members of the group, who he carefully guided, without being overbearing, through other challenges to help them develop their skills. The challenge Lewis lead on involved gathering Lego engines for a plane, collecting humanitarian aid to take on the flight and getting the engineer to the plane ready for take-off. The codes were incredibly complex and took Lewis and his peers several weeks and several meetings to crack, but their success on the competition day made it all worthwhile.

In addition to this, Lewis was part of a small group of students who took part in the Go4Set project which involved them designing and building a model of an eco-hotel. They worked closely with a STEM ambassador who took the group to Laing O’Rouke in Worksop to discuss the viability of the design. Lewis’ insightful questions showed knowledge beyond his years.

Good luck to Lewis and Miss Chuman at the finals on 13th December. We’ll let you know how they get on!