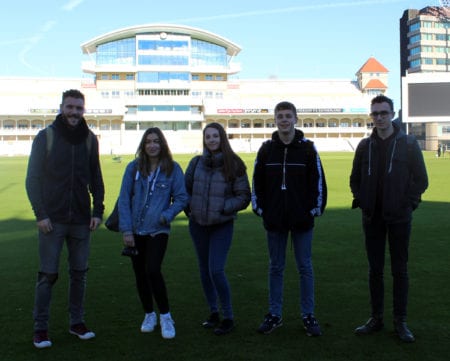 On Thursday 25th October 2018 our Digital Media group went off into Nottingham to record and photograph places of interest around Nottingham as part of their Digital Media coursework to help create a marketing campaign to promote the city.

The group consisted of 8 students split into two teams who travelled the city collecting still and moving images to help their promotion campaign. One group were focussed in town while the other headed to West Bridgford.

The highlight of the day for the city centre team was undoubtedly filming in Victoria Centre where they were forced to wear Press and Photographer high vis jackets, which they enjoyed immensely.

The West Bridgeford group headed straight for sporting venues including Meadow Lane, The City Ground (you reds) and Trent Bridge where they were treated to a tour and allowed special access to the members enclosure and even the pitch! The students were as usual a credit to themselves and the academy.