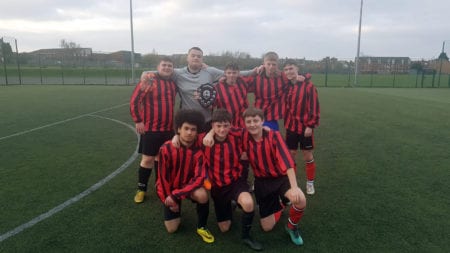 Congratulations to the Year 11 and Year 8 boys who both won their respective finals at the inaugural Mansfield and Ashfield FA, 8-a-side football tournaments. Having both qualified from the group stages, the teams contested the finals in the competition’s inception year.

The Year 11 team put on an impressive defensive and counter-attacking display to secure a goalless draw in their game against Quarrydale Academy before winning 3-2 on penalties. Daniel, Harley and Carnell skilfully dispatching their penalties.

The Year 8’s were much more dominant in their display against Brunts Academy and were worthy winners. Despite going a goal down, a quick reply from Kyron and a last gasp header from Warren ensured The Holgate Academy won their second trophy of the evening.

A terrific display of positive teamwork proved key for both sides. The students represented themselves and their school with pride. Congratulations from everyone at The Holgate Academy!