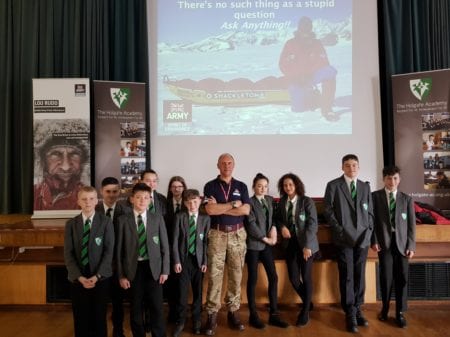 On Thursday 14th March we had the great pleasure of welcoming Captain Louis Rudd to the academy to talk to eight humanities classes about his spirit of endurance expedition to Antarctica. The classes made up of Year 8 and Year 10 students were mesmerised as he spoke of his expedition and the training involved in preparing for the trip. He shared with students his role models and the how a visit to the head teachers office first sparked his interest in exploring. Captain Rudd brought along with him his expedition kit, minus the one pair of pants that he wore for the whole expedition! Students were able to see the technology he used to help navigate the journey, portable solar panels and his trusty compass.

Captain Rudd grew up in Lincolnshire and joined the Royal Marines in 1985 at the age of 16. After completing basic training he served with 40 Commando where he conducted a 6 month operational tour in South Armagh, Northern Ireland. He later transferred to the Army and over the following years saw service in the Balkans, Iraq and Afghanistan, and did further work in Northern Ireland. He qualified as a sniper and parachutist.

He completed a Master’s Degree (MSc) in Security and Risk Management with the Army’s support. During his later years of service he became a Regimental Sergeant Major, one of the most senior positions a soldier can hold, and it was during this time that he planned and led the SPEAR 17 Adventurous Training expedition which saw him lead a team of five reservist soldiers as they completed a 1,100 mile traverse of Antarctica, for which he was subsequently awarded an MBE for leadership.

In April 2017 he was commissioned as an officer and now serves with the Parachute Regiment at the Infantry Battle School in Brecon. From October 2018 to January 2019 he completed the expedition SPIRIT OF ENDURANCE which saw him ski solo and unsupported 1,000 miles across Antarctica in just 56 days, becoming the first ever Briton and only the second person in history to complete this journey. He holds the world record as the first person to have traversed Antarctica twice on foot, and is holder of the Antarctic distance record, having a total mileage of approximately 2,800 miles behind him.

Following his talk students had the opportunity to take photos and examine the kit including snow boots and arctic jacket which weighed almost nothing. He showed images demonstrating the massive weight loss he experienced on the expeditions and the frost bit wounds. Captain Rudd has made a number of TV appearances and his expeditions certainly captured the imagination of our students.