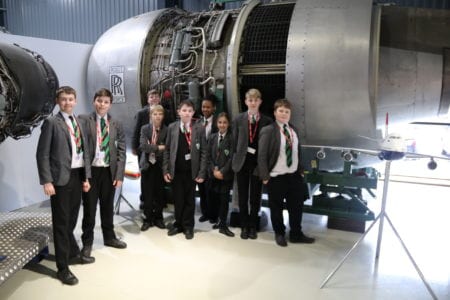 In October 2018, our new robotics club formed.  There were several new faces joining our experienced members, preparing for the competition day on 8th March.  Last year, the competition day was snowed off, but we managed to make it this year and were excited to arrive at Rolls Royce, Derby.

We had a good look around the building and enjoyed looking at the engines in the Heritage Centre.  After some last minute practice time and adding a scooper, the team of volunteers introduced themselves and the day begun.  First up was a drag race over four metres.  Each team was called up to the stage one at a time to take part.  Our name was called first and we looked a nervous group!  We recorded a time of 2.5 seconds.  The next group managed 9 seconds, so we were feeling pretty good.  In the end, we finished in 8th place, but we did improve on our time in the second run!

We then began a rotation around four different challenges.  The mat challenge involved gathering engines for a plane, collecting humanitarian aid to take on the flight and getting the engineer to the plane ready for take-off.  Our robot then had to climb a steep ramp for bonus points.  On the first attempt, we managed two of the tasks.  Later on in the day, we had another opportunity and managed five of the tasks – a great improvement. There were two presentations to do, one of which Ryan claimed was the best thing he’d ever done!  Finally, there was a mystery teamwork challenge which the group really enjoyed.

There were presentations to finish the day, with prizes awarded to the top two teams and the winners of each challenge.  Unfortunately, we didn’t make it through to the finals, but we were pretty pleased to finish in the top ten in the region!