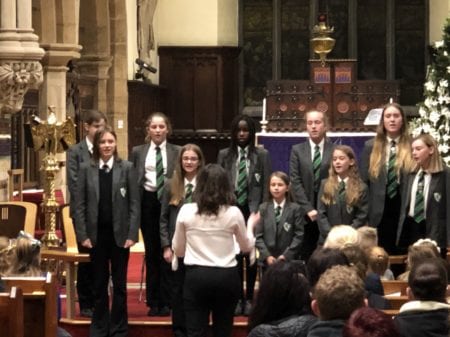 The Holgate Academy Carol Concert was hosted at the beautiful parish church of St Mary Magdalene on Wednesday 12th December. This year we were absolutely delighted to welcome the fantastic choirs of Beardall Fields Primary School and Hillside Primary School. The children in both choirs were an absolute credit to their schools, not only performing some incredible vocals in front of a packed congregation, but also demonstrating respect and maturity as part of the audience for the other songs. It was a pleasure to see and hear them singing in the congregational carols too – there are certainly some stars of the future to watch out for here!

Huge thanks also go to the staff at both of the schools, who clearly worked so hard to create such beautiful performances with the children. It was such a pleasure to perform with them.

As for Holgate, both the choir and the a cappella group were astonishing. The work ethic and talent on display was there for all to see, as they performed effortlessly and professionally a mix of songs, from traditional carols, to new mixes of existing songs, right through to the choir’s very funny (and superbly performed) 12 Days or So of Christmas – if you missed this, you missed a real treat. The a cappella group, led by Miss Blackburn, have really got into their stride now, performing songs with complex 5-part harmonies, and are becoming a very accomplished group on the circuit.

The evening was hosted by two very committed sixth form students, Greg and Mark, who not only hosted, but performed too. It was a real treat to hear the haunting With or Without You, as Mark accompanied himself on acoustic guitar, followed by Greg who sang a cappella, filling the church with his impressive vocals.

Even the staff managed to muster up a choir, attempting a couple of harmonies along the way, under the watchful eye of our new head of music, Mrs Mathews.

The carol concert is always a highlight of our school calendar, and it was lovely to see so many people in the pews joining us and starting off the festive season with a mince pie and a few songs.

We would like to thank Reverend Jo, and everyone at St Mary’s for being such welcoming and giving hosts, and as the Christmas season has now officially begun, the Music and Performance team would like to wish you all a very Merry Christmas and a peaceful New Year.